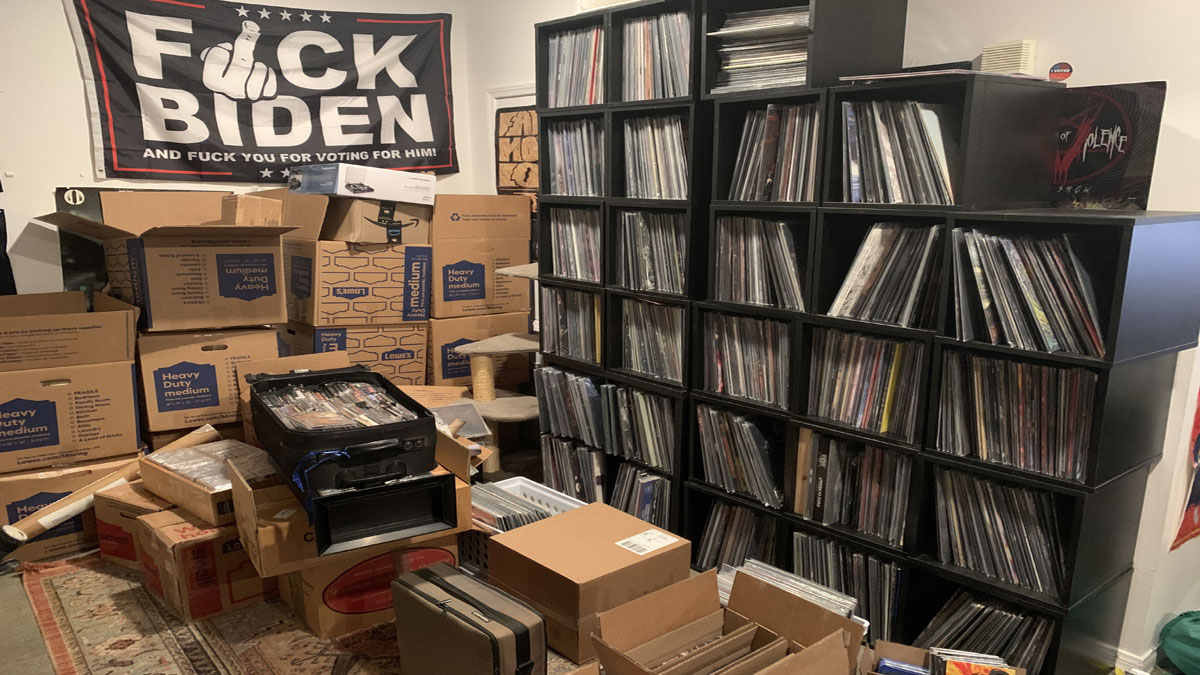 This month’s update took me on an adventure to Chillicothe, Ohio, where I picked up a massive collection of 2500 extreme metal LPs, 5500 CDs, and around 2000 cassettes, all in mint condition.

Here is a video of the haul once I loaded it into my place.

Sadly, this collection did not become available under the best of circumstances. The original owner of this insane collection, Scott Baxter, of the Philadelphia-based metal/hardcore band, Dare To Defy, tragically succumbed to cancer at age 55.

Here is a link to some of Dare To Defy’s music, active from the late 80s to the late 90s.

On his passing, he left his collection to a friend who was not a big metal fan. She contacted me through this site, and after a few phone calls, I decided to fly out to Chillicothe to check it out and perhaps make an offer.

I left Los Angeles on the redeye and hoped to catch some sleep on the first leg of the flight from LAX to Atlanta. But unfortunately, I was unable to fall asleep on the plane. So I arrived in Columbus and decided to power through. I picked up a U-Haul truck from a town near the airport and went to view the collection — it was as she described to me, so after a bit of negotiation, I wrote the owner a check, loaded the truck, and was on my way back by 3 PM that afternoon.

At this point, on no sleep, I began the most white-knuckle leg of the trip: The 2000-mile-plus trek back to Los Angeles.

I only drove a few hours on the first day before stopping in Indiana. Then, after 16 hours of driving the next day, I stopped for the night in Missouri, and again after a similar length drive, I stopped in Denver.

Most miraculously, there were no serious snafus the entire trip – no running of gas, speeding tickets, or brushes with death.

Highlights From This Collection

I have yet to make it through every album in this monolithic assemblage, but I pulled out a few to feature in this first blog post and will follow up with some more in future posts.

Mortician – Re-Animated Dead Flesh LP 2016 Hells Headbangers NM GLOW IN THE DARK – Though this album is technically a reissue, the early Mortician albums never appeared on vinyl. This limited glow-in-the-dark vinyl is quite rare, collectible, and pricey.

Death Angel – The Ultra-Violence LP WHITE 2016 Metal Blade – 3984-15377-1 NM/NM – This white vinyl limited run of 100 from the OG Death Angel thrash classic is very sought after because of its low print run.

Mercyful Fate ‎– Melissa LP 1983 Megaforce Records ‎– MRI-369 EX/NM – The debut album from Mercyful Fate “Melissa” is widely regarded as one the most influential extreme metal albums of all time. To find an original copy in near-mint condition is a rare treat.

Satan – Court In The Act LP 1984 LP Metal Blade – MBR 1016 EX/EX – Though technically a reissue, this first US pressing of “Court In The Act” by the British heavy metal band Satan is very sought after.

Cryptic Slaughter – Money Talks LP 2014 Relapse – RR6547 NM [GREEN LIMITED 300] – These limited color reissues from the godfathers of grindcore not only look cool, but they are also almost worth as much as original copies of this LP.

Deicide – Deicide LP 2014 Metal Blade Records – 3984-15311-1 NM/NM [RED VINYL] – These limited red reissues of the debut album from Deicide sold out so fast they are now scarce and never sell for less than a hundred bucks!

Have A Collection Like This You Want To Sell?

I constantly look for metal and punk CDs, cassettes, and record collections. I am happy to come to you given the right situation, or we can do these types of deals through mail/email without meeting. No amount of records is too big or too small. More info here: